On January 19, the Georgia Environmental Protection Division released Twin Pines Minerals LLC’s draft Mining Land Use Plan (Draft Plan) and opened the 60-day public commenting period – allowing concerned citizens and Swamp advocates to voice their concerns and opposition to Twin Pines’ mining proposal. Click the “Take Action” button to email your comment to the Georgia EPD and to state legislators fighting to pass legislation that would permanently protect Trail Ridge from future proposals to mine, or mail your comment to:

Please register for one of the two meetings here: https://gaepd.zoom.us/webinar/register/WN_2DroBrvkTZGU_4OsogtPSQ

There is a capacity of 1,000 people per meeting and it is excepted that they will both reach capacity.

More information on the Draft Plan can be found at: https://epd.georgia.gov/twin-pines

The legislation was prompted by Twin Pines Minerals, LLC’s plan to develop heavy mineral sands mines along Trail Ridge, the sandy ridge that runs along the eastern border of the swamp and helps keep the Okefenokee intact.

Proposals to mine this area have surfaced since the 1990s. While HB 71 would have no impact on the mining permit currently being weighed by the EPD, it would prohibit future mining along Trail Ridge.

Clikc the “Take Action” button to ask your representatives to support HB 71.

More information about the Okefenokee Protection Act can be found at: https://www.legis.ga.gov/legislation/63631 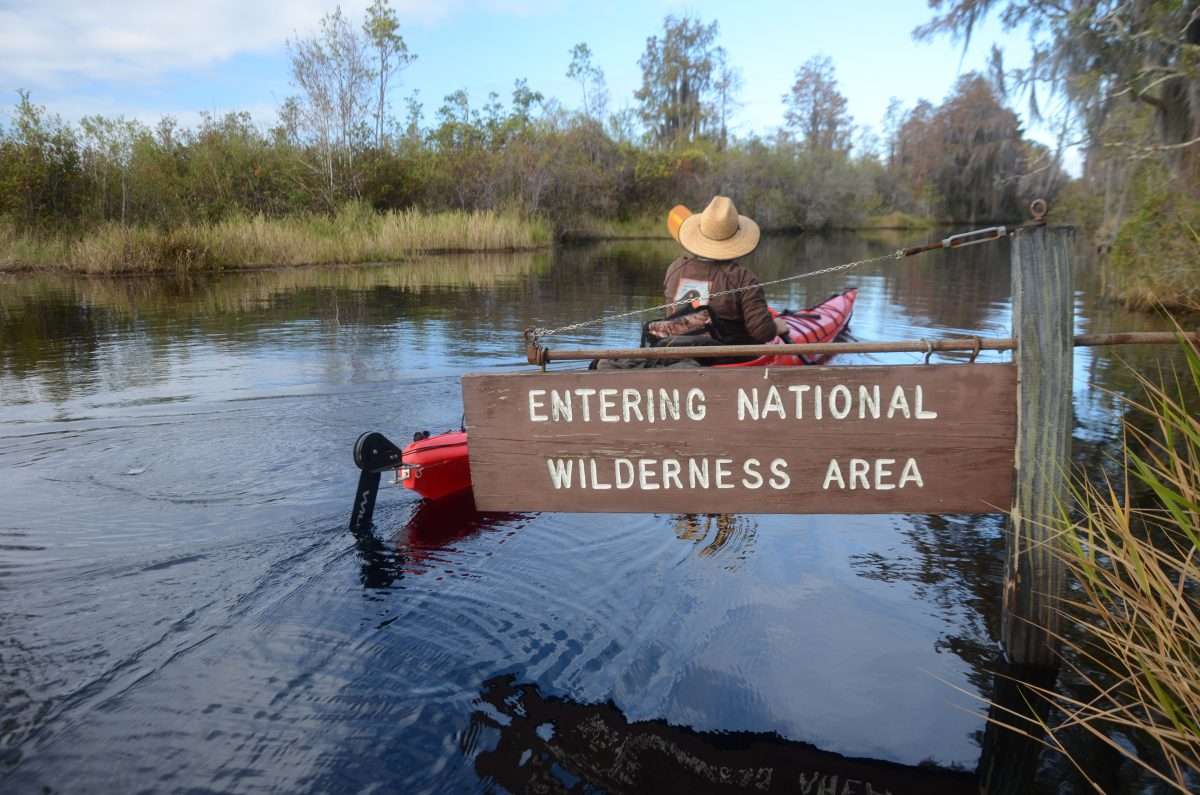 Okefenokee Destiny is a love letter from locals to a deeply mysterious and largely unknown swamp as it comes under pressure from a mining company that could destroy it before it gains its rightful protected place in the world.

The Okefenokee Swamp, “The Trembling Earth,” is a place unlike any other in the world. It’s the largest intact blackwater wetland in North America and a mecca for research scientists from around the world. It’s also in the heart of an economically depressed region and under pressure from extractive industries. How can the Okefenokee be conserved for future generations – and what lessons can we learn to keep from repeating our past mistakes?

Okefenokee Destiny, a 14-minute PBS EcoSense for Living documentary, explores these questions and takes viewers on a journey through the swamp while introducing them to individuals and organizations working to protect this natural wonder. Georgia River Network is taking “Okefenokee Destiny” on a tour around Georgia to help amplify the movement to protect the wetlands from mining. All screenings will be followed by a brief Q&A with experts featured in the documentary.

View Upcoming Showings
Receive a Recording of the Virtual Screening

If you would like us to bring a screening to your business, event or local theatre, please reach out to us at info@garivers.org. 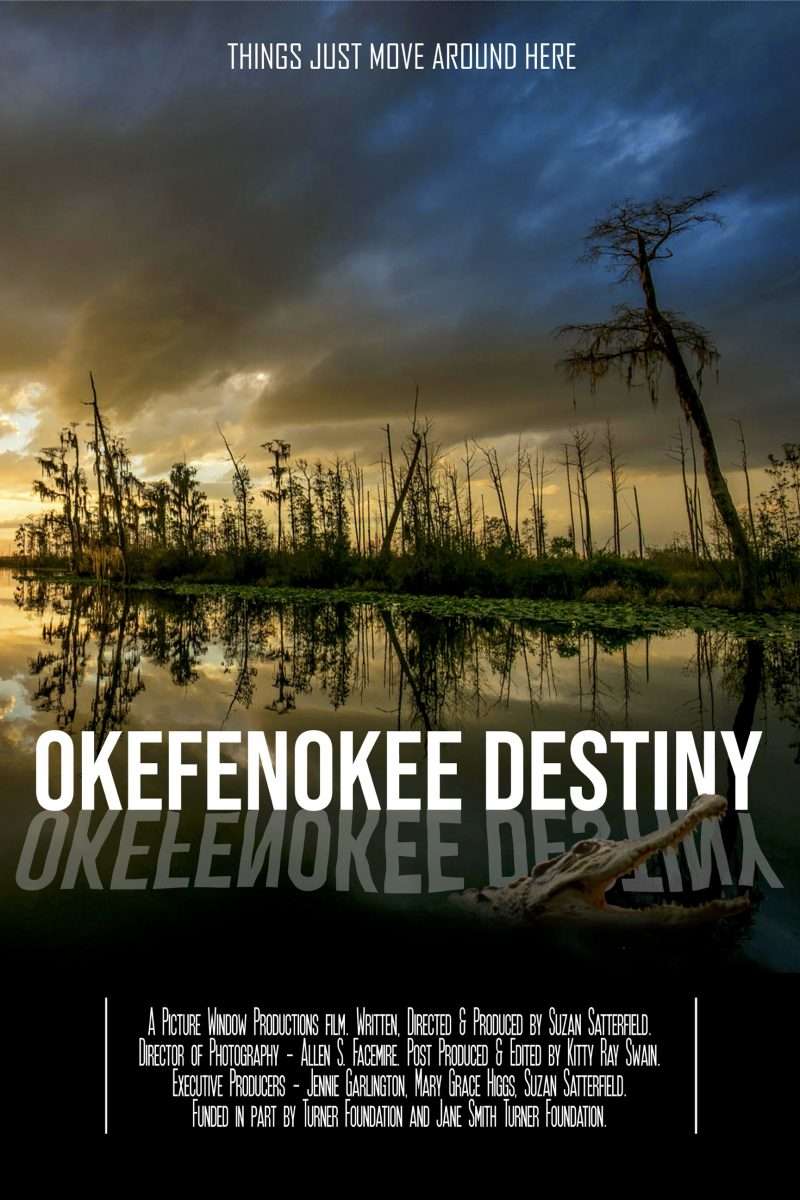 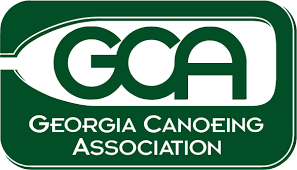 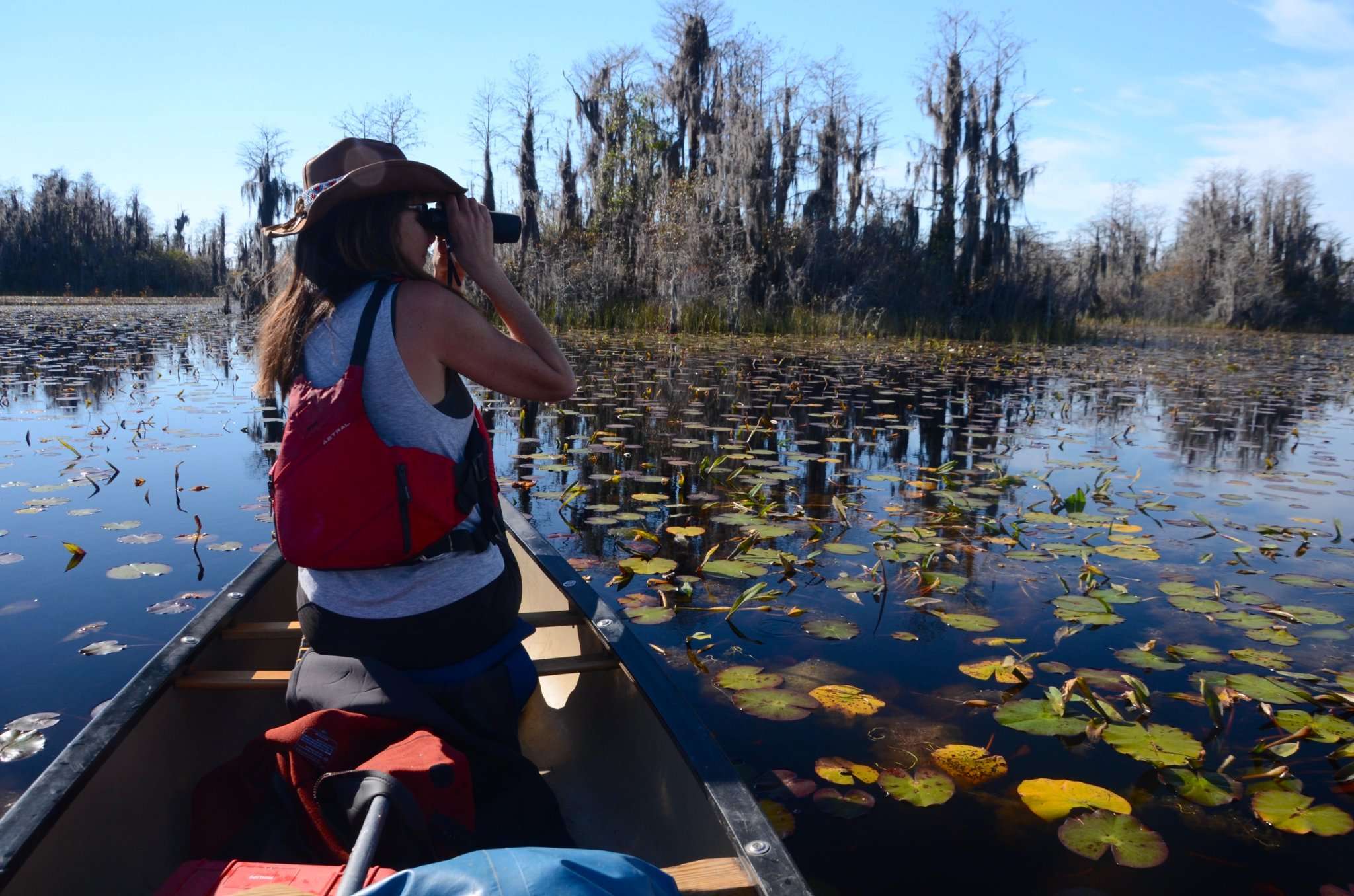 What We Are Fighting For:

The Okefenokee Swamp, one of Georgia’s seven natural wonders; the largest blackwater swamp in North America; and a wetland of international importance, is threatened by a proposed titanium mine.

Twin Pines Minerals, LLC, an Alabama mining company with a poor track record of environmental stewardship, has asked federal and state authorities permission to operate a 898-acre heavy mineral sand mine next to the Okefenokee National Wildlife Refuge. This is the first phase of a mining operation on a 12,000-acre site. The company proposes digging 50-foot deep trenches in Trail Ridge, the very rise of land that helps regulate water levels in the swamp. These excavations would extend below the water table of the swamp and could alter water levels in the swamp.

The U.S. Fish & Wildlife Service has written that “should impacts occur, they may not be able to be reversed, repaired or mitigated for.” Click here to read an open letter from the science community, signed by more than 40 scientists from across the nation, about the proposed mining project.

At risk is one of the last self-contained, naturally functioning wetlands left on Earth. Among the most visited National Wildlife Refuges in the country, the Okefenokee hosts some 600,000 visitors annually who help create more than 750 local jobs and a total annual economic output of $64.7 million in the four counties surrounding the swamp.

Ask Governor Brian Kemp to save the swamp and stop this mine. 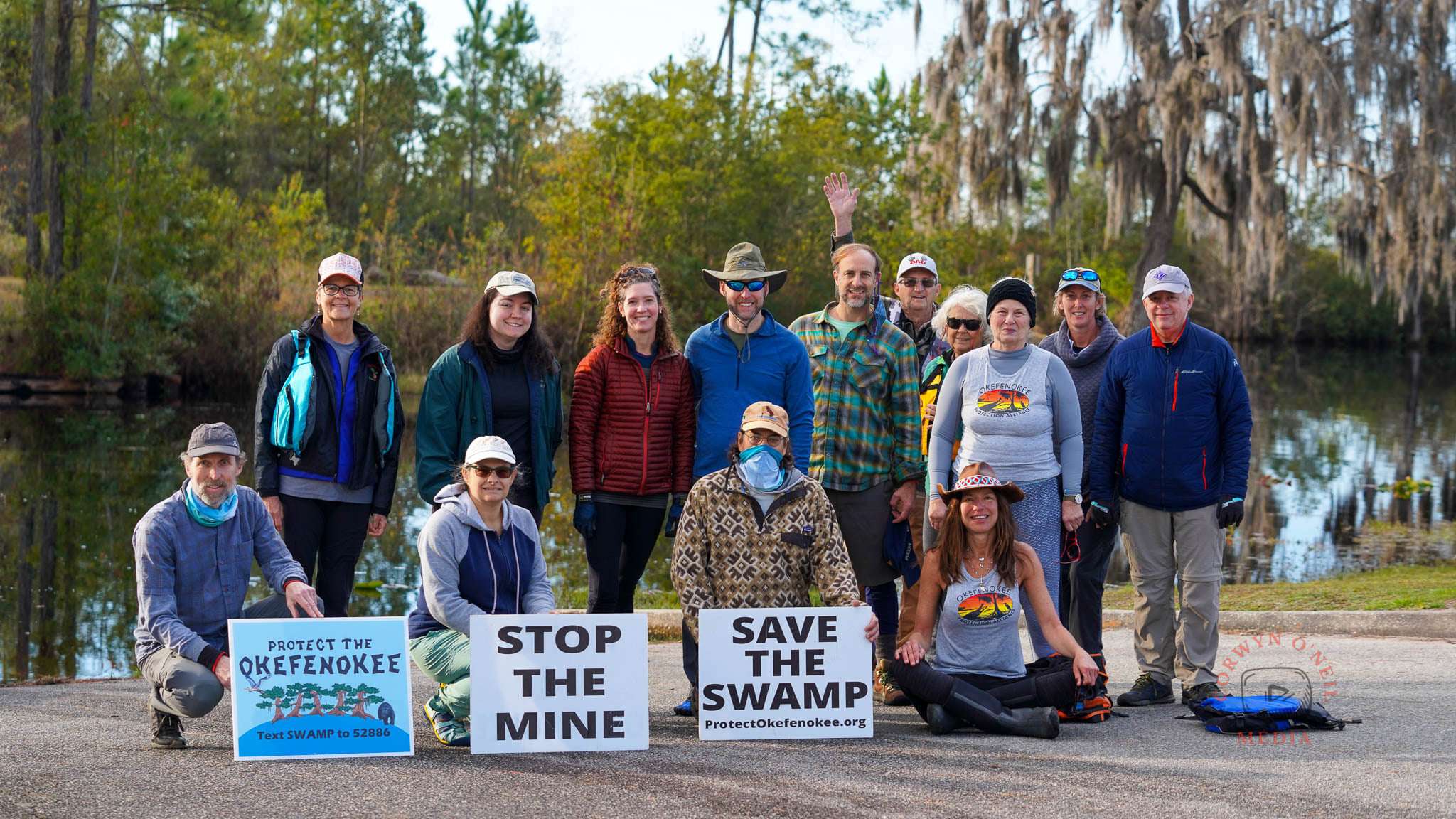 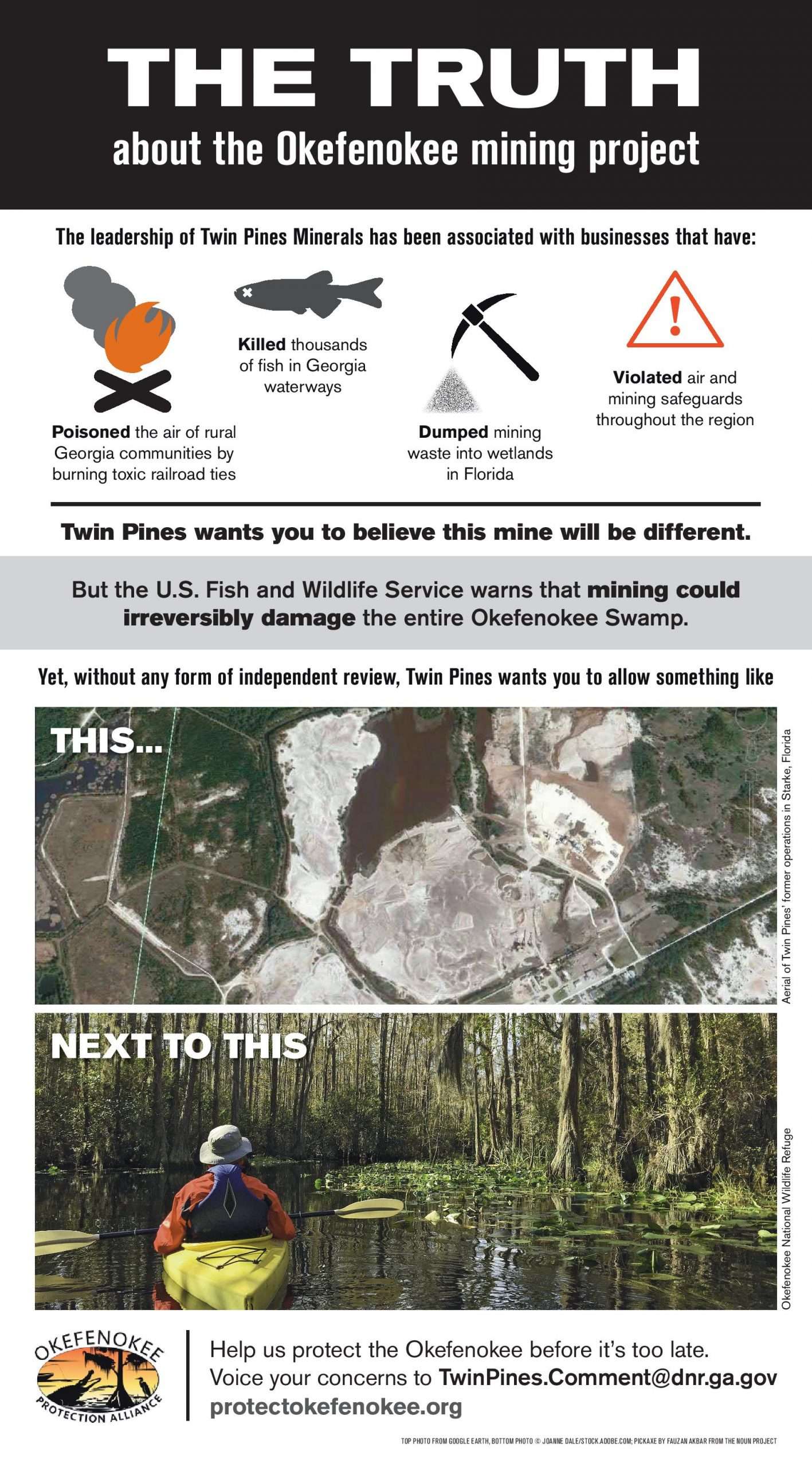 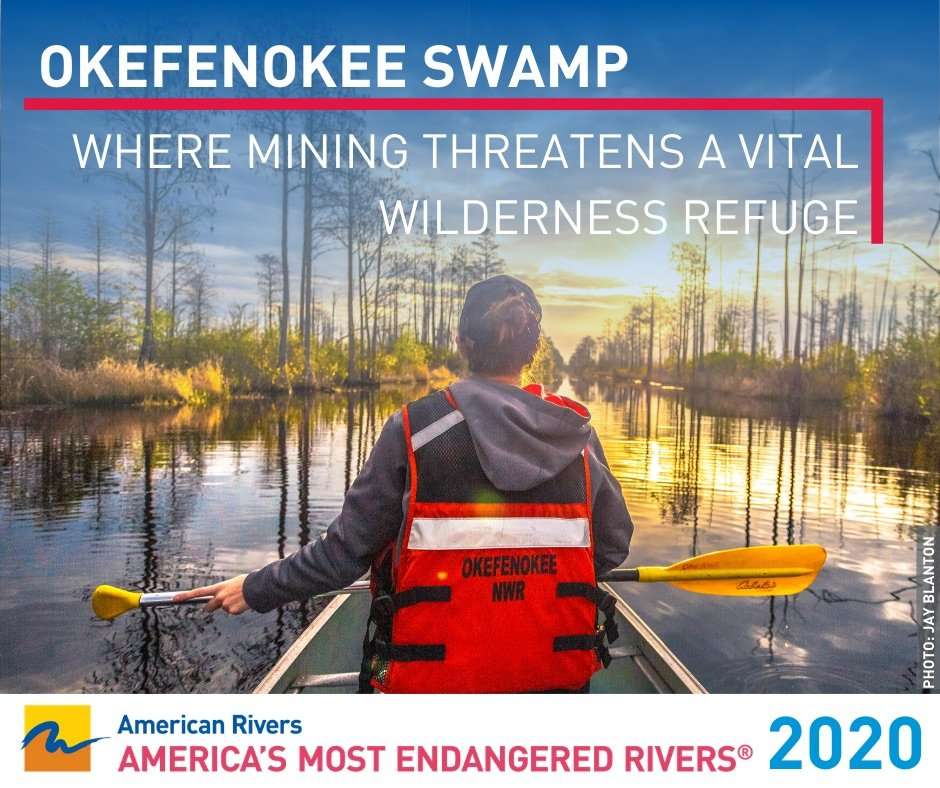 Mining on Trail Ridge can draw down the water level of the Okefenokee Swamp and dewater headwater wetlands and tributaries and the rivers they feed, destroying natural habitat for federally listed species and providing dry peat fueling uncontrollable fires.” Read the press release.

Twin Pines Minerals, LLC, an Alabama mining company, is seeking permission to operate a heavy mineral sand mine to extract titanium in Charlton County on Trail Ridge adjacent to the Okefenokee National Wildlife Refuge. Trail Ridge is an ancient geologic formation impounding the swamp on its eastern boundary. Twin Pines’ 8,000-acre mining area is dangerously close to the Refuge.

Excavation and groundwater pumping could permanently alter the ancient geologic features that create the swamp and provide important wildlife habitat. Alterations to groundwater flow or impacts to the swamp could impact the Suwannee and St. Mary’s rivers. In addition, the mining could impact imperiled species, including gopher tortoises, a candidate for listing under the federal Endangered Species Act. Gopher tortoises are considered a “keystone” species on which other animals depend.

The US Fish and Wildlife Service has written that “Should impacts occur, they may not be able to be reversed, repaired, or mitigated for.” They originally submitted for a permit for a 2,400 acre mining destroying over 500 acres of wetlands and 4,658 linear feet of stream. Twin Pines withdrew this original application and now has resubmitted for mining 740 acres only 2.7 miles from the Refuge. We continue to oppose mining on Trail Ridge in order to protect the Okefenokee Swamp and the St. Marys and Suwannee rivers that originate from it.

Changes to the Clean Water Act regulations enacted in early 2020 enabled Twin Pines Minerals LLC to bypass the federal wetlands permitting process and any federal environmental oversight of the mining proposal. This led to the fate of the mine hingeing on decisions made by Georgia leaders and the state’s Environmental Protection Division (EPD).

However, in early June of 2022, the U.S. Army Corps of Engineers announced it would be reasserting federal jurisdiction over the wetlands on Twin Pines’ mining site. In the memo, the Corps stated that the company had not adequately consulted with the Muscogee (Creek) Nation during the permit process. With this news, the Georgia EPD announced they would be putting the five environmental permits they were reviewing on hold and asked Twin Pines to reapply after they apply for and receive federal permits.

Georgia River Network and our partners in the Okefenokee Protection Alliance are encouraged by the Corps’ decision to reassert jurisdiction and are grateful that Senator Ossof and others have engaged in this issue and taken action to protect the Okefenokee Swamp from mining.

Get more details on the Okefenokee Protection Alliance’s Resources page. 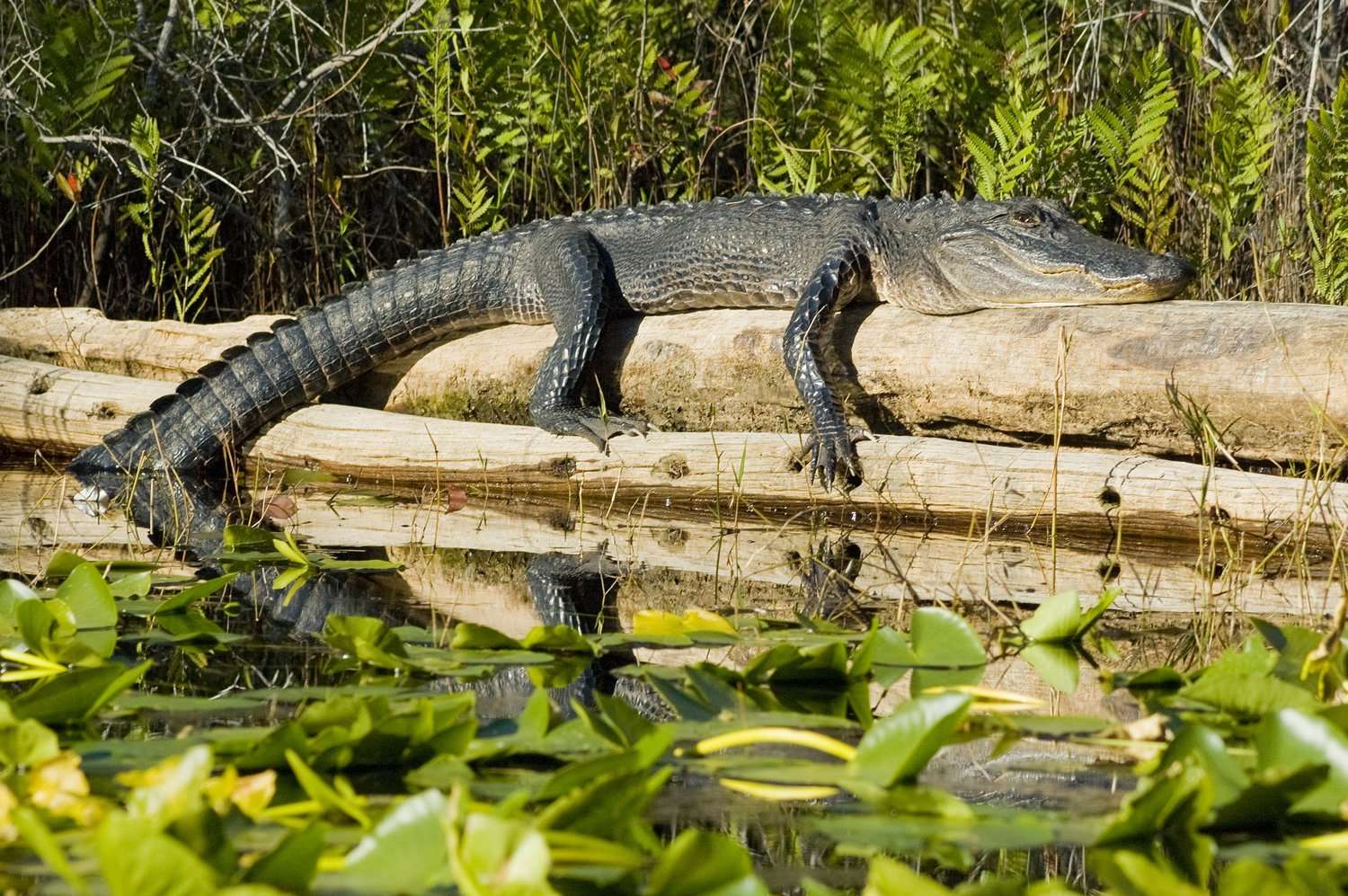 Today, 600,000 people visit each year to discover its amazing landscapes—including peat beds, island prairies, and cypress forests—and wildlife like American alligators, sandhill cranes, indigo snakes and gopher tortoises. National Geographic named the Swamp one of the 100 most beautiful places on the planet. In 2015, Okefenokee National Wildlife Refuge in Georgia was also identified as one of the top 10 canoe trips in the world by Green Global Travel.

The refuge is part of the National Water Trail System, one of only 21 designated trails in the U.S., in part because it requires an act of Congress. The Okefenokee and the Suwannee River both have water trails that are part of Georgia River Network’s Water Trail System. The St. Mary’s trail is under development. To learn more about Georgia Water Trails, click here. 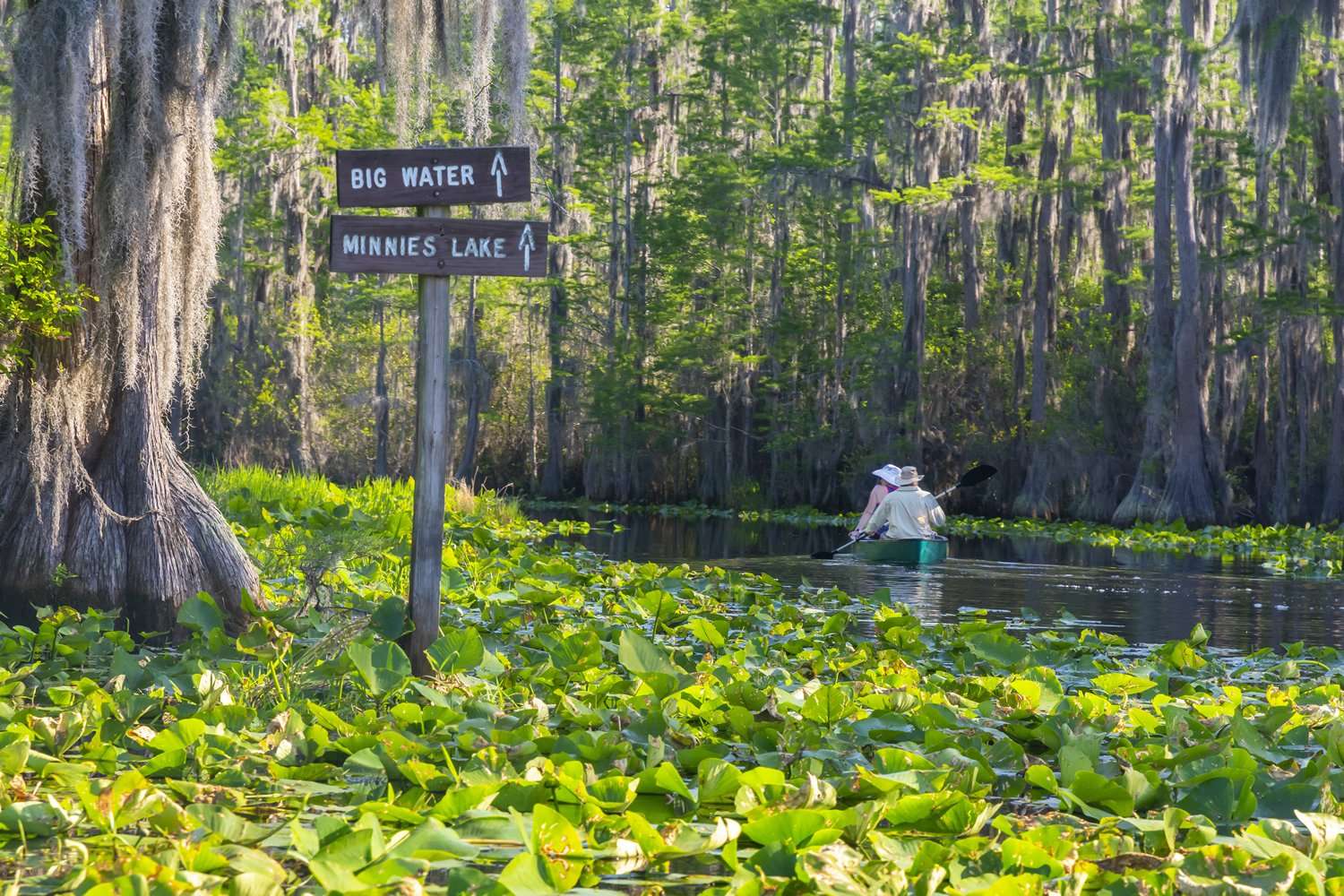 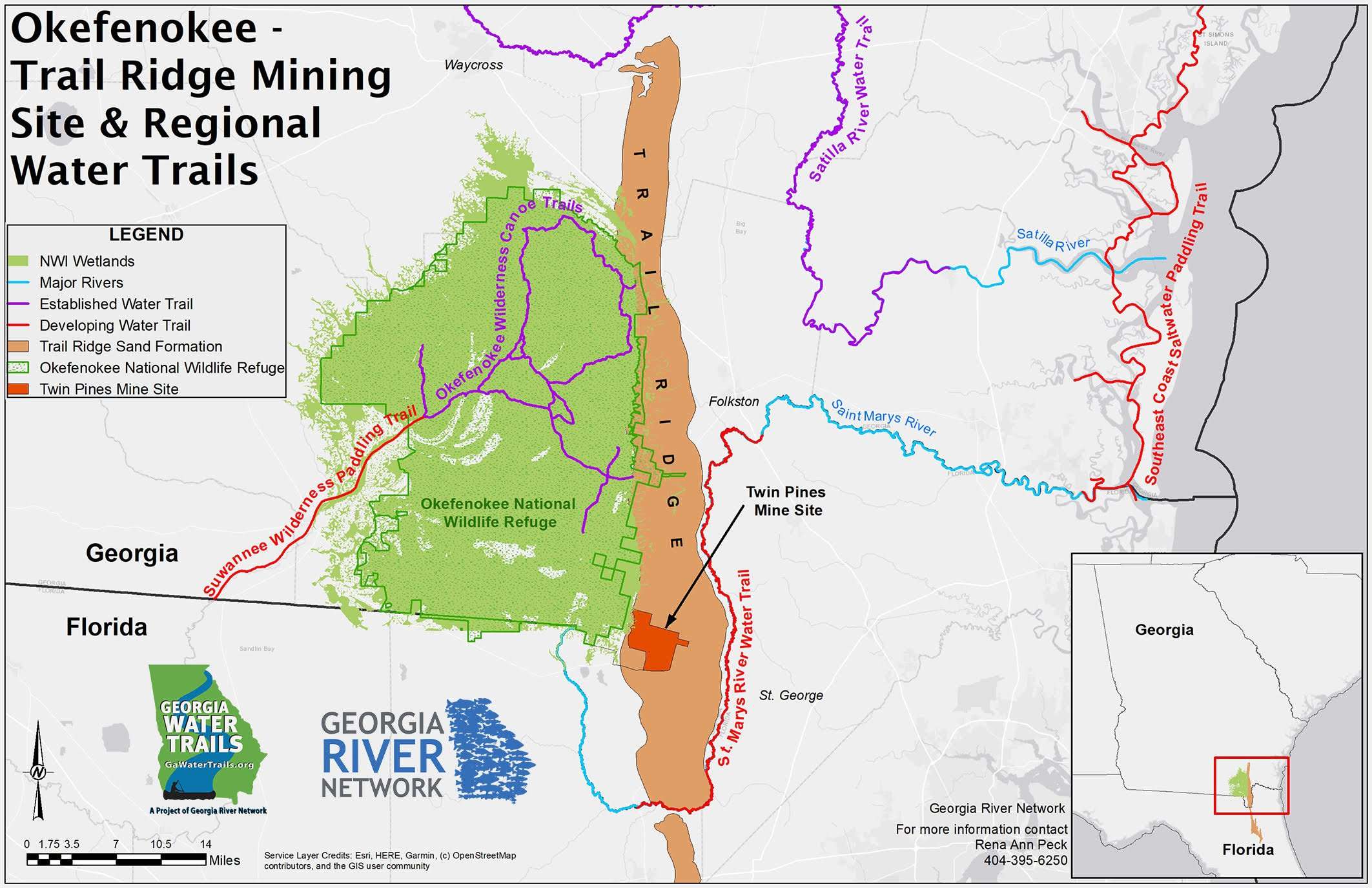 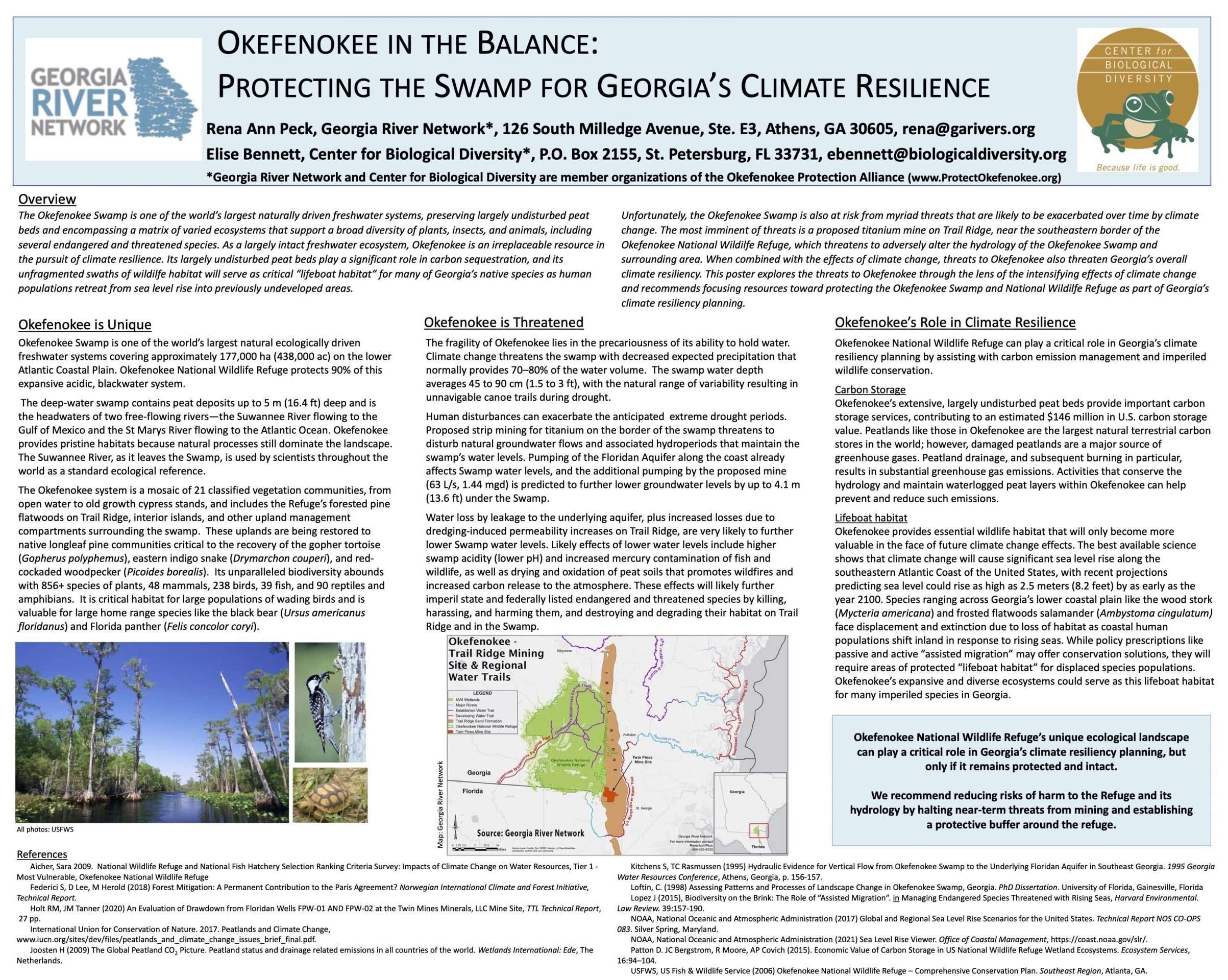 GRN is a Member of the Okefenokee Protection Alliance

The Okefenokee Protection Alliance is a coalition of more than 30 conservation organizations representing millions of members that have joined forces to save the swamp from the proposed Twin Pines Minerals, LLC titanium mine and other threats that jeopardize the integrity of the Okefenokee Swamp. Learn more at https://protectokefenokee.org/

Save the Swamp Campaign – We want your swamp stories! 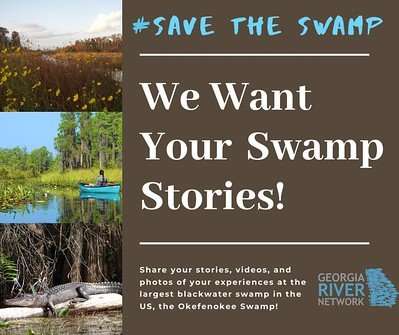 The Okefenokee Swamp has been the scene of countless adventures and awe-inspiring encounters with nature and as this national treasure faces the threat of a mining operation near its tea-colored waters, Georgia River Network wants your stories, photographs and videos that illustrate the importance of protecting the largest blackwater swamp in the U.S. Send your photographs, videos and stories to info@garivers.org. Together, we can SAVE THE SWAMP.

Letters to the Editor

November 30, 2021. “Open Letter from the Science Community: Proposed Mining Near the Okefenokee”

August 23, 2022. Georgia Recorder. “Fate of mine at Okefenokee Swamp’s edge could soon be cemented by Georgia EPD“

July 28, 2022. Atlanta Journal-Constitution. “5 Things to Know About the Okefenokee Swamp”

June 13, 2022. The Georgia Sun. “Georgia suspends applications for titanium mine near Okefenokee Swamp”

June 6, 2022. WABE. “Why the Muscogee (Creek) Nation gets a say on the Okefenokee mine proposal”

May 30, 2022. Saporta Report. “The Okefenokee Experience: A tri-county effort to boost ecotourism around the swamp”

May 25, 2022. Fox31. “Senator Jon Ossoff is advocating for the protection of the Okefenokee swamp”