Forming the headwaters of the St. Marys and Suwannee Rivers and flowing past the cities of St. Marys, Georgia, and Fernandina Beach, Florida, the Okefenokee Swamp is designated as a National Natural Landmark, a Wetland of International Importance and a potential UNESCO World Heritage Site.

Okefenokee National Wildlife Refuge is the largest national wildlife refuge in the eastern United States. The Okefenokee Swamp is an unparalleled wetland system made up of peat beds, island prairies, open lakes, creek channels and cypress forests. It is home to alligators, carnivorous plants, an abundance of bird species and the Florida black bear. Several state- and federally listed species depend upon the refuge, including the eastern indigo snake, wood stork and red-cockaded woodpecker. Small populations of endangered shortnose and Atlantic sturgeon also call the St. Marys River home. 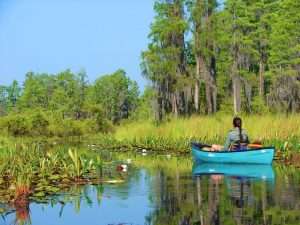 The Okefenokee Swamp is a unique international treasure. Unlike Florida’s Everglades, the swamp’s health remains essentially unchanged. Uncompromised by agriculture or industrial development, the swamp is one of the world’s healthiest large-scale freshwater ecosystems. And whereas other large wetland ecosystems have suffered ditching, draining and channelization, the Okefenokee retains its original hydrologic function, storing immense volumes of water through both flood and drought years and feeding the rivers that drain from it.

The Okefenokee National Wildlife Refuge receives an average of 600,000 visitors annually, who come for canoeing, fishing, hunting and wildlife viewing. In addition to the $64.7 million in local economic output this generates for the four counties surrounding the refuge, tourism supports over 700 local jobs.

The refuge is part of the National Water Trail System, one of only 21 designated trails in the U.S., in part because it requires an act of Congress.  The Okefenokee and the Suwannee River both have water trails that are part of Georgia River Network’s Water Trail System. The St. Mary’s trail is under development. To learn more about Georgia Water Trails, click here.