WELCOME TO THE
OKEFENOKEE PROTECTION ALLIANCE

With its unique ecosystem and incomparable beauty, the Okefenokee Swamp is a national and international treasure, and the source of the St. Marys and Suwannee Rivers. With its opportunities for boating, birding, fishing, photography, adventure, and hunting nearby attracting 650,000 visitors a year and supporting more than 700 jobs, the Okefenokee National Wildlife Refuge (NWR) provides more economic benefit to each of Georgia and Florida than any other NWR. These organizations are fighting long-term to Save the Swamp from anything that would damage it, including the potentially-devastating titanium strip mine proposed by Twin Pines Minerals, LLC, on the doorstep of the Okefenokee NWR. 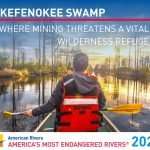 American Rivers named the Okefenokee Swamp and St. Marys River as one of America’s Most Endangered Rivers of 2020, citing the threat titanium mining would pose to the waterways’ clean water, wetlands and wildlife habitat.

The annual America’s Most Endangered Riversreport is a list of rivers at a crossroads, where key decisions in the coming months will determine the rivers’ fates.

The Georgia Water Coalition’s 2019 Dirty Dozen report highlights the politics, policies and pollution that pose the greatest risks to Georgia’s water and her 10 million citizens.