Check out each day of our Paddle Georgia journey as well as previews of our three campsites for the week by scrolling down!

The following is a day by day blow of what to expect on Paddle Georgia 2022 as we journey some 97 miles on the Flint River between Thomaston and Montezuma/Oglethorpe. Be sure to click on the links to learn more about the subjects in the daily descriptions! 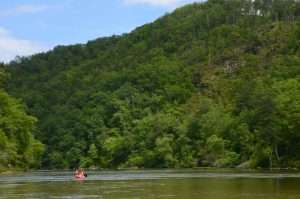 June 19 Pine Mountain Polka: Approximately 14 miles from Ga. 18 to Sprewell Bluff Park—This is arguably the most scenic stretch of river in the entire state. Here the river spills over beautiful shoals as it winds through the Pine Mountain escarpment. Expect soaring views of cliffs and mountains rising abruptly from the riverside and plenty of places to stop and play. There’s even a beautiful waterfall to explore a short distance from the river. The day’s journey ends at Sprewell Bluff Park where, as the name suggests, spectacular bluffs loom over the river. Once threatened by a hydro-power dam, this section of the Flint has been preserved and once you’ve paddled it, you’ll shout a big thank you to the many advocates who fought to save the Flint in the 1970s. 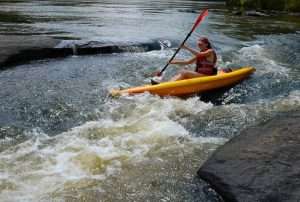 June 20 Yellow Jacket Jive: Approximately 12 miles from Sprewell Bluff Park to Pobiddy Road—No other section of the Flint is more popular than this one. It contains the largest of the Flint’s rapids–one of which (Class III Yellow Jacket) we will portage around, but there’s still plenty of fun Class I shoals to give a thrill as it passes through the Big Lazer Creek Wildlife Management Area and through a host of significant cultural and natural sites, including the scene of a Civil War skirmish at Owens Island. If we’re lucky, we’ll even catch a glimpse of late-blooming shoals spider lilies. 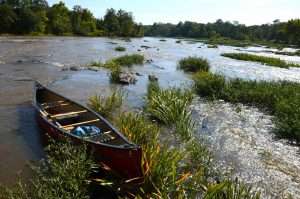 June 21 Pobiddy Bump: Approximately 14 miles from Pobiddy Road to U.S. 19—On this run, the Flint continues its route across the Fall Line separating the Piedmont from the Coastal Plain and as a result the shoals keep on coming. It’s a surprisingly thrilling ride with the highlight being Snipe Shoals. This fast-moving water and rocky substrate are the haunts of some of the Flint’s most heralded fish–the much sought after shoal bass and the orange and black-colored (and appropriately named) Halloween darter. The scenery remains wild and the riverside cultural history is rich. We’ll pass by the boyhood home of Georgia Gov. John B. Gordon, one of Gen. Robert E. Lee’s commanders during the Civil War and a prominent figure in post-antebellum Georgia politics. 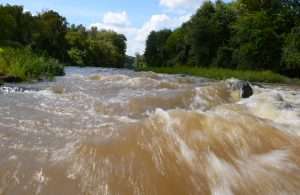 June 22 Auchumpkee Cha Cha: Approximately 12 miles from U.S. 19 to Ga. 128—This run gives us the last of the Flint’s Fall Line shoals. For the first five miles, intermittent shoals persist, but beyond that the river flattens out as it makes its way into the upper Coastal Plain. The paddling is pleasant as you make your way by numerous historic Native American sites with the paddle ending at the site of Benjamin Hawkins’ Creek Indian Agency where the federal representative tried to forge bonds between white settlers pushing west and the native Creek Indians between 1796 and 1816. Auchumpkee Creek is a major tributary of the Flint and famous for its covered bridge dating to 1892. 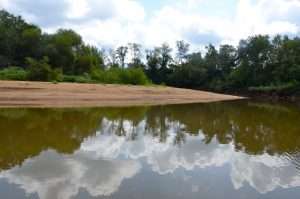 June 23 Magnolia Swamp Stomp: Approximately 18 miles from Ga. 128 to Ga. 96—Our one “marathon” run of the week, below Ga. 128, the Flint assumes the character of a typical Coastal Plain river, winding around sinuous bends and oxbows, leaving cut banks and wide sandbars at seemingly every turn. A wide forested floodplain and riverside swamps–like Magnolia on the east and Beechwood on the west–complete the distinctly south Georgia vibe. Again, the river is flanked by rich Native American history; this section is home to two known Indian mounds and multiple Native American village sites. 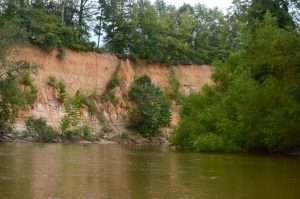 June 24 Cut Off Congo: Approximately 14 miles from Ga. 96 to Miona Ferry—Along this scenic, wooded and wild route, the river continues its winding Coastal Plain ways, passing by numerous oxbow lakes and sloughs as it constantly carves a new path to its ultimate destination. The floodplain remains wide with Beechwood and Magnolia swamps continuing to flank the river’s main stem. Our take out for the day is the site of Miona Ferry, famed as the last operating ferryboat in Georgia when it closed in 1988. Deadfalls and strainers can sometimes block the river’s path here; other “hazards” include alligators. 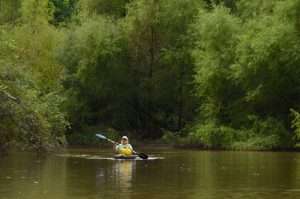 June 25 Montezuma Bluffs Mambo: Approximately 15 miles from Miona Ferry to Ga. 49—Montezuma Bluffs, a 450-foot high ridge that parallels the river along this route is its dominate feature. Where the river bangs against this ridge, it runs straight; where it drifts away from the base of the ridge, it continues its winding ways with many cut banks, sandbars and oxbows. The effect is a decidedly different feeling river than those stretches just upstream. The day ends in the twin Flint River towns of Montezuma and Oglethorpe where we’re planning an old-fashioned fish fry courtesy of Flint Riverkeeper and a street party with live music courtesy of the City of Oglethorpe’s downtown development authority.

To view launch sites and campsites click on the icons in the Paddle Georgia 2020 Course Map below. 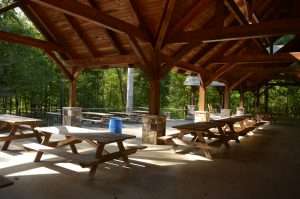 June 18-21 Camp Thunder: The Gerald Lawhorn Scout Base will be our home for the first three nights of our journey. Nestled in a bend of the Flint River that we will paddle past on our first day of our journey, Camp Thunder is everything you’d expect in a Boys Scout camp and more. You’ll have the opportunity to camp in the iconic canvas platform tents (with mattresses) or tent camp in one of many shady spots or along the banks of a small pond. Limited indoor, climate-controlled camping will be available. We’ll enjoy our evening meals and programs in a magnificent, shady outdoor pavilion a stone’s throw from the river, and take breakfast in the air-conditioned camp dining hall. Ample showers and restrooms (they host thousands of Scouts each year), and other amenities like a climbing wall, zipline and sky swing will also be available for participants. The playground adjacent to the outdoor pavilion is as impressive as they come. If you ever attended camp as a child, this setting will take you back to the days of your youth. Meals will be provided by the Camp Thunder staff. For those wishing to “camp” in nearby hotels and motels, Thomaston is the nearest town about 15 mile to the southeast. Click here for a listing of local lodging.

June 22-25 Taylor County High School: Taylor County High School will be our home for the next four nights of our journey. Sitting a short walk from downtown Butler, the home of the Vikings is excited about hosting Paddle Georgia for the first time. This is small-town Georgia at its best. There’s rumors that local boosters may even be selling homemade ice cream! Camping will be on school grounds surrounding the classroom buildings and gyms as well as on the school’s practice field. Indoor camping will be in one of the schools gyms (un-air-conditioned, but we will bring in portable coolers). We’ll have meals and programs in the school’s cafeteria. Restaurants, the Piggly Wiggly grocery store and other amenities are within easy walking distance from the school. For those wishing to “camp” in nearby hotels and motels, there are some options within 10 miles of the school. These options will be posted soon on our information page for participants. 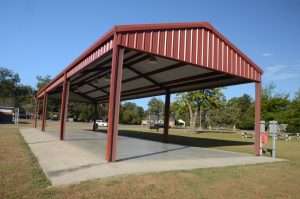 June 25 Oglethorpe: Get ready for a party! The City of Oglethorpe is planning a community festival in conjunction with our River’s End Celebration and Flint Riverkeeper is cooking up one of their scrumptious fish fry meals. Live music and vendors are expected, and of course, we will announce the winner in the Vibe Kayak Ducky Derby. Stick around and celebrate your accomplishment with fellow paddlers. For those staying overnight, tent camping will be on the grounds of the City Park and indoor camping will be in an adjacent gymnasium. No shower facilities will be available at this site.

I have made once a year friends that I enjoy seeing every June! 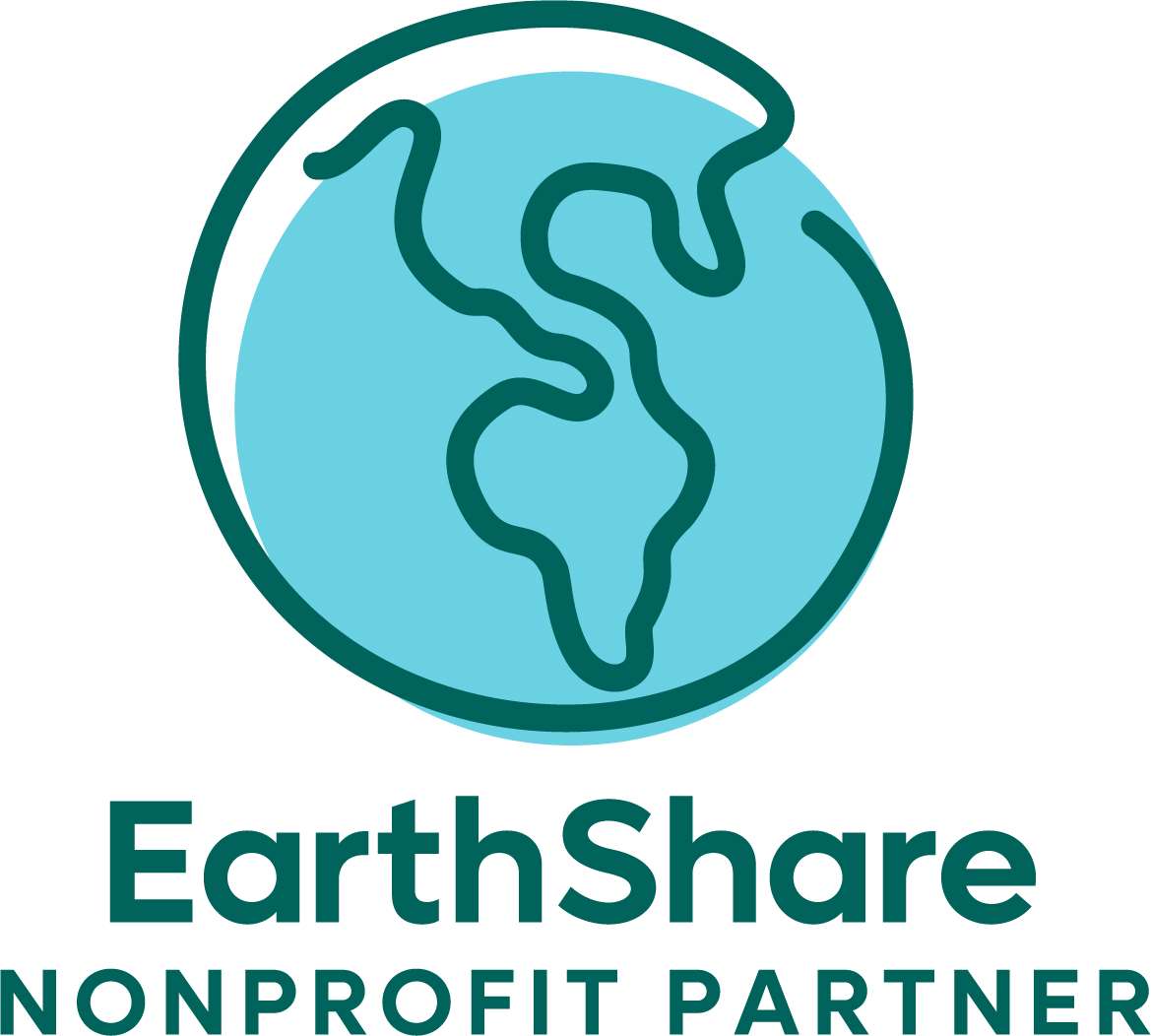